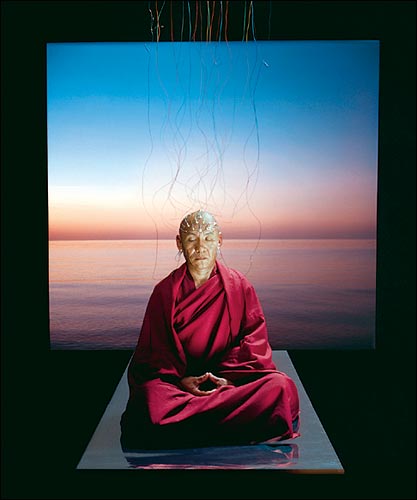 Tanya left a comment, which makes me happy. When Tanya was at McGill she did a paper about the Medical Effects of Buddhist Meditation. Justin and I have been following the neurological studies on Meditation for a while and we dumped a bunch of books on her, which she actually read. I wouldn’t mind a copy of that paper actually, Vish. Anyways, I’m very impressed with the studies I’ve seen. Meditation works as therapy. It makes people feel better and be nicer and stuff. Here’s a quote from this most recent article in the Times.

No data from these experiments have been published formally yet, but in ”Visions of Compassion,” a compilation of papers that came out last year, Davidson noted in passing that in one visiting monk, activation in several regions of his left prefrontal cortex — an area of the brain just behind the forehead that recent research has associated with positive emotion — was the most intense seen in about 175 experimental subjects.

In the years since Davidson’s fax from the Dalai Lama, the neuroscientific study of Buddhist practices has crossed a threshold of acceptability as a topic worthy of scientific attention. Part of the reason for this lies in new, more powerful brain-scanning technologies that not only can reveal a mind in the midst of meditation but also can detect enduring changes in brain activity months after a prolonged course of meditation. And it hasn’t hurt that some well-known mainstream neuroscientists are now intrigued by preliminary reports of exceptional Buddhist mental skills. Paul Ekman of the University of California at San Francisco and Stephen Kosslyn of Harvard have begun their own studies of the mental capabilities of monks. In addition, a few rigorous, controlled studies have suggested that Buddhist-style meditation in Western patients may cause physiological changes in the brain and the immune system.

Is true, I say. Whenever I’m depressed I meditate a lot and I usually stabilize within a few days. When I was younger it used to take me weeks or months to get out of depressions, but Mindfulness Meditation helps me be happy and stuff, like, almost all the time. I do feel ‘bad’ but then I meditate and I don’t worry about feeling bad and stack layers of guilt and worry on top of that initial kernel of unhappiness. Which was my problem. I still feel unhappy, but I can accept that feeling and I don’t fight it anymore, so it doesn’t fight me. And we’re all good.

They’ve been finding some serious brain data that explains my experience. The Article is good. There’s a conference at MIT in October which I tried to get into for months last year but when I made my last call and said I was an undergrad student they laughed at me. People don’t seem to take me seriously as an undergrad.. I was getting this Ed Psych Secretary to hack me into a Graduate Seminar and she asked me 3 times if I was an undergrad and what I was doing. She gave me candy though, so I got no beef with her. But the people at that MIT, doing their job I understand, but I still think a lot of academics I meet are insular douchebags… Excuse me.

As a side note, while I’m talking shit, I think Tibetan Buddhism is corrupt. I got no opinion on the Dalai Lama or those individual monks in the study cause I ain’t never met them. However, I sat in on this class Thubten Jinpa (a translator for the Dalai Lama) was teaching at McGill and he was talking about the history of Tibetan Buddhism. I feel like the Buddhism that the Buddha practiced was simple, but when it came to Tibet it mixed with their local Shamanistic Religion Bon, so they ended up with 18,000 bodhivistas and saints and all this weirdness, plus the religion was adopted by various kings and it became a part of their bullshit class system. This a quote from this excellent article. There’s a lot of scary stories of child rape and eye gouging and stuff.

Religions have had a close relationship not only to violence but to economic exploitation. Indeed, it is often the economic exploitation that necessitates the violence. Such was the case with the Tibetan theocracy. Until 1959, when the Dalai Lama last presided over Tibet, most of the arable land was still organized into religious or secular manorial estates worked by serfs. Even a writer like Pradyumna Karan, sympathetic to the old order, admits that “a great deal of real estate belonged to the monasteries, and most of them amassed great riches. . . . In addition, individual monks and lamas were able to accumulate great wealth through active participation in trade, commerce, and money lending.” (8) Drepung monastery was one of the biggest landowners in the world, with its 185 manors, 25,000 serfs, 300 great pastures, and 16,000 herdsmen. The wealth of the monasteries went to the higher-ranking lamas, many of them scions of aristocratic families, while most of the lower clergy were as poor as the peasant class from which they sprang. This class-determined economic inequality within the Tibetan clergy closely parallels that of the Christian clergy in medieval Europe.

In 1953, the greater part of the rural population — some 700,000 of an estimated total population of 1,250,000 — were serfs. Tied to the land, they were allotted only a small parcel to grow their own food. Serfs and other peasants generally went without schooling or medical care. They spent most of their time laboring for the monasteries and individual high-ranking lamas, or for a secular aristocracy that numbered not more than 200 wealthy families. In effect, they were owned by their masters who told them what crops to grow and what animals to raise. They could not get married without the consent of their lord or lama. A serf might easily be separated from his family should the owner send him to work in a distant location. Serfs could be sold by their masters, or subjected to torture and death.

Those monks were rapists, murderers, and thieves. Check out the article. It was seriously some ugly shit, but Westerners fawn all over Tibetan Buddhism, and Buddhism in general. Whatever whatever. I’m telling you, a Buddhist will cap you out as soon as the next guy. Organized Buddhism is just as fucked up as any organized religion. Here’s a little story about Sri Lankan Buddhists…

on the morning of September 25, 1959, Talduwe Somarama Thero called on Bandaranaike by appointment at his residence at Rosemead Place. Just when Bandaranaike was in the act of paying obeisance to the Buddhist monk, Somarama whipped out a revolver and shot at the Prime Minister, hitting him in the stomach at point blank range. It was later revealed that the disillusioned monk, the assassin, was manipulated by former supporters of the Prime Minister. On September 26, Bandaranaike succumbed to the gunshot injuries.

Bandaranaike’s daughter Chandrika is president now and she is hard as fuck. Back to TB, though, getting kicked out of Tibet was the best thing that happened to Tibetan Buddhism, it became much nicer and started actually taking care of its people. I still think the religion itself needlessly complicates the teaches of the Buddha, but that’s my personal opinion. I mean teachings, but that does remind me of an especially inappropriate Peaches song from her Teaches of Peaches album. I think I’m a little off topic.

um, actually I think I have fucked up a nice discussion of Buddhism and the Brain with all these Guns and Bitches. The NYTimes Article is very good, and I think the issue is important. I think that Meditation is the most promising pschological therapy since Prozac. If there was a pill with these neurological results it would be flying off the shelves. No doubt. So the news is good, you just happened to have gotten it from a 21-year old who listens to too much Gangsta Rap. So, that’s why it’s all fucked up.