Here are the results of a fruitful Sunday spent learning random shit and sleeping off last night’s Rosh Hashanah dinner (thanks to Mark’s fam!)

“Just two glasses of wine can ruin your brain’s ability to detect its own errors, and to correct them … Ridderinkhof’s team studied people performing a lab task designed to generate a high proportion of errors. They found that alcohol had a significant effect on activity in the anterior cingulate cortex (ACC), a region known to be involved in detecting errors and in signalling a need to adjust performance after an error.

Just two units of alcohol reduced by a third the amplitude of the brainwave generated from this region following an error. “This means people either detect errors less often or less efficiently, or both,” Ridderinkhof says. ”

I had a little bit more than two glasses of really good wine last night… and some scotch. I’ve been trying out this social drinking thing, but I’m still not so sure about it. I do find it slightly odd that Alcohol recieves so much social support, while Marijuana receives little or none.

I was reading about Quantum Mechanics in the New Scientist and I saw this quote by Max Planck, the guy who discovered it and resisted its implications until he died. Quantum Mechanics destroys the idea of absolute truth.

“Here lies the revolution. Quantum theory says that what happens to any individual photon is genuinely and inescapably unpredictable. It has a 95 per cent chance of being reflected, and a 5 per cent chance of being transmitted or absorbed, and that’s all there is to it. There’s nothing about any photon, no secret property or hidden clue, that can tell you any more precisely than that what it will do. The unpredictability is innate.”

Anyways, I digress. The quote is

“A new scientific truth does not triumph by convincing its opponents and making them see the light, but rather because its opponents die and a new generation grows up that is familiar with it.”

I get a little pissy sometimes cause nobody in power seems to understand the Net, and because these people are attacking Linux and File-Sharing. But, they can’t really fight the future generations that will grow up on the Net.

Went to a Rosh Hashanah New Year’s dinner last night. I was sitting around the table with Mark and 20 or so of his relatives and friends. Eating challah and gefilte fish, plates of meat and fruit and ceremonial apples dipped in honey.

Mark’s dad asked me what tied the International Jewish community together, and I said suffering. He laughed. At the other end of the table I was talking to some cousins about Politics, ben sur. Israel, ben sur. Part of the reason I got into Jewish culture was because ate one point I was really pissed at Israel. I also didn’t know anything about the subject, and I could feel myself slipping into anti-semitism. So I made an effort to meet more Jewish people (not a problem in Montreal) and I went to their Synagogue.

When I was singing and praying with them, and I could see their bodies all around me, bobbing to the rhythm of the prayers, I couldn’t look at the Terrorism in Israel the same way. I’d hear the news and I’d think of their bodies, the bodies of my friends, bloody inside crumpled buses.

Before I used to sympathize with those attacks.

Anyways, I don’t really want to get into a political discussion. I support Israel and I support Palestine and I do not support Terrorism. When I was talking last night I was saying that the only way out of this mess is Education, education of the youth, because hate springs out of ignorance. For me it was easy to hate Israel when I didn’t know any Israelis. Now I’ve met Israelis and I cannot hate them. I feel like the children in the Middle East need that education, because it’s too late for hateful old men like Arafat and Sharon. Their generation is lost. I still have hope for the children of today, but the people at the table were saying that this coming generation is lost too. That scares the shit out of me.

This is some graffiti on the walls of Gaza City. 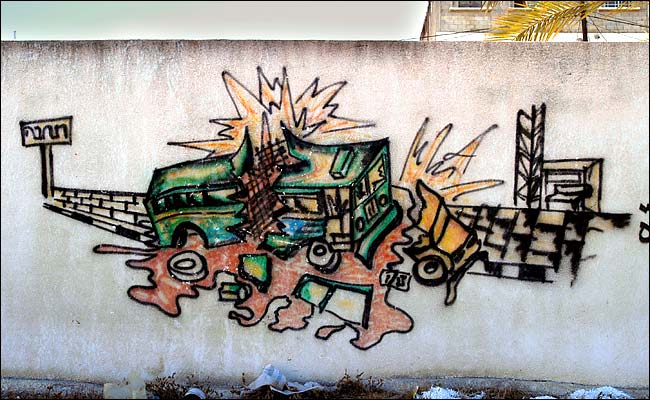 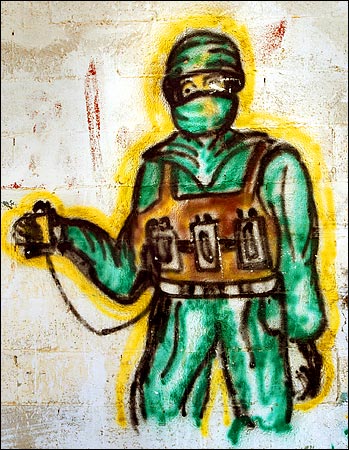 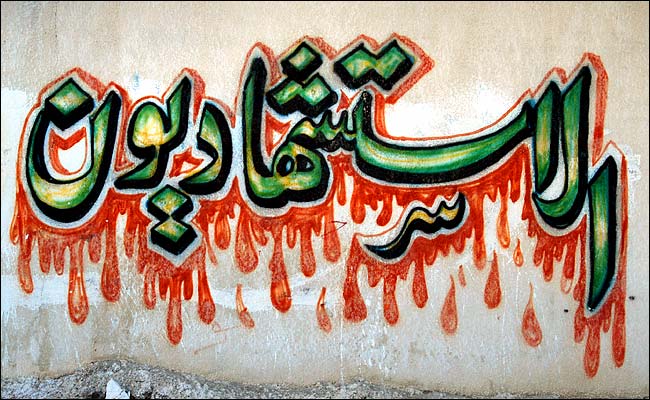