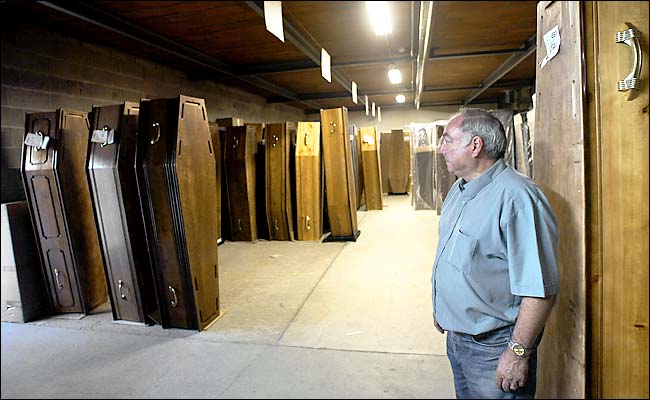 Coffins stored in a General Funeral Services warehouse in the Parisian suburb of St.-Maur-des-Fossés. 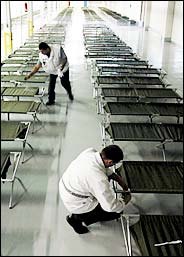 Part of the refregerated hall in Rungis, near Paris, where a week ago workers set up cots to receive bodies before burial.

The images of death in France are stunning. This set of photographs from the Times caught my attention cause there aren’t actually any dead bodies in the photos. Just coffins and cots, just symbols of death. Just disembodied numbers, no faces. Over 5,000… from the heat.

There were “165 bodies in an immense refrigerated hall at Rungis, the city’s big fruit and vegetable market, awaiting funerals.”

“Mr. Mazeyrie said that many elderly people were left behind by vacationing families. Some, he said, informed of the death of relatives, postponed funerals so as not to interrupt the Aug. 15 holiday weekend, leaving the bodies in the refrigerated hall. On Wednesday, he said, 10 families came to Rungis to bury their dead.”

My friend Claire- an expat French Citizen – is coming back to Montreal tomorrow. I’ll see what she has to say… I’m inclined to talk shit about the French Government, but I thought they behaved badly during the (neverending?) Iraq Debate. And LePen, booooo. And the World Cup. Booooo.